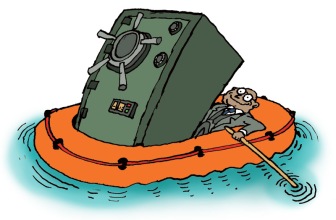 Getting rich people to pay taxes seems just about as difficult as climbing Everest in your nightie. During a blizzard.

Well, today some of the world’s richest people have been named and shamed for their penchant to stash money in offshore accounts, mostly in the British Virgin Islands near the Caribbean.

The International Consortium of Investigative Journalists was handed around 2m emails and documents by an anonymous source – in total over 250gb of data. The documents identify individuals who have used complicated financial instruments to evade tax illegally. Here’s a list.

The information hasn’t been fully analysed, but don’t get too excited – your local MP hasn’t been identified yet. Most of the culprits are hardly a surprise. I would be shocked, in fact, to hear that Azerbaijan’s first family (including the president) had not been involved in a bit of crony capitalism and put their nest egg in a place where the tax man fears to tread.

But this development is just the latest in a long trail of breadcrumbs pointing to something like $20tn which was never paid in tax and now languishes in one of the world’s 50-odd tax havens.

Indeed, it’s becoming quite an industry. Barclays Bank’s tax avoidance division generated about £1bn a year between 2007 and 2010 advising people – legally – how to stop their assets and incomes being taxed. Incidentally, the bank also paid just £82m in corporation tax last year after a reclassification of profits based on how they value their own debt.

While individual tax evasion seems like a big nasty scary thing, corporate tax evasion is a whole different beast. The US president is rather fond of citing Ugland House, a building in the Cayman Islands, which is home to 18,000 companies because of the country’s favourable tax policy. Or lack thereof. None of these companies actually operate in the building, of course. They just register it as their official company address.

The British government is taking action, in all fairness. Her Majesty’s Revenue and Customs is publishing naming and shaming lists of individual tax dogers. Britain’s prime minister, David Cameron, made tax avoidance issue number one on the agenda for Britain’s temporary leadership of the G8 – a club of the world’s richest eight economies. Unfortunately, there are many critics who say that the government actually isn’t doing enough. Politicians have to make difficult choices, like: do I make an example of this big multi-national and lose what tax they do pay when they move out (and perhaps other companies like them) or do I pretend to bash them over the head but actually just tell them off like naughty children?

2 thoughts on “Show me the money”