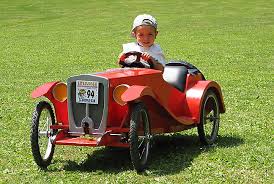 I hate being pegged. In my early twenties I used to drive past a primary school on my way to work and every morning would coincide with the lollipop lady and a troupe of five-year-olds. I could feel the accusative stares directed at me when the parents reigned back their kids as I bore down on their zebra crossing in my VW Polo. At 12 miles an hour.

Then there’s the look of surprise, followed swiftly by the ushering on of Johnny and Claire, with the odd furtive glance in my direction to see if the road rage had overcome me. Then, just cos I like to prove that I’m not one of those hooligans my mum always used to tell me about, I’d thank them for getting in my way.

So no, we’re not always a menace. But I am also guilty of once trying to find out how fast my car went (not very with a 1.4 litre engine).

Unfortunately, policy tars us all with the same brush. Young drivers are often referred to as having a licence to kill, and the government is mulling slapping new restrictions on learner drivers, such as a night-time curfew and limit on passenger numbers. So how dangerous are we?

The non-profit research organisation Full Fact recently asked this very question.  They reported that of the 151,000 road traffic collisions in 2011, 24 per cent involved young people. Those drivers were responsible for 412 deaths, or 22 per cent of the total. The only statistics I can find for the numbers of drivers in the UK (to put this in perspective) are from 2009. They show that drivers under 25 account for less than 10 per cent (pdf) of all those licensed in the UK, so yes, sadly, young drivers are a bit of a menace.

Having said that, the proportion of serious accidents attributed to young people has dropped hugely in the last few years, according to Full Fact. Not because of any safety measure or policing, but because since economic meltdown hit in 2008 young people can’t afford to drive.

It’s also interesting how the emphasis among statisticians is on “catastrophic” insurance claims or fatal accidents. Obviously, dying is more serious than whiplash, so this is fair to an extent. But it also misrepresents young people as careless drivers. They’re not. They just drive much faster and more frequently when tired or drunk, doing more damage when they hit stuff.

The reality is that young people take more risks. This is biological, and no policy is going to stop it. But it makes politics difficult, because if the British government wants to tackle the country’s critical youth unemployment, making it harder for young people to drive is not going to help.

Bottom line: yes, young people are dangerous on the road. But not all, and not always.